As my program has ended in Zaragoza and now that I am spending my time about 2.5 hours east, my cuisines continue to amaze me. When it comes to comparing the styles of foods from Zaragoza and Barcelona, the mediterranean diet is still present and some of the notable Spanish cuisines can still be found. One contrast is, because Barcelona is such a bigger and more popular city, that there are many more restaurants to choose from. Although these restaurants too abide by the mediterranean diet, there are unique restaurants that offer their own twist. Not only this but Barcelona also appeals to its large population of tourists by offering restaurants that bring a taste of anywhere in the world.

In the top left picture we have a spin-off of patas bravas which is one of Spain’s most notable, but simple dishes (potatoes + mayonnaise + a spicy tomato sauce). The top left picture is a tuna salad joined by an assortment of sides such as green pepper, rice, pesto, octopus and more. The bottom left shows a night out celebrating a friends birthday where you can see what you can expect to receive once seated in a Spanish restaurant: pan con tomate (bread with tomato). The bottom right marks one of my favorite dishes since being in Spain: pulpo. Pulpo is an octopus dish where here we have it on top of a bed olive oil soaked potatoes sprinkled with paprika. This week has been full of adventuring! This past week in Spain I was able to visit Donostia-San Sebastian, Vitoria, Salou, and La Rioja. In between traveling to different wineries, as a group we were able to make several stops to soak in the differences in sceneries and just how much a cities can differentiate despite the close distance. Spending the night in Vitoria was refreshing because the city is alive with shopping centers, restaurant strips, and encourages both a young and older crowd. I was lucky enough to visit on a weekend so I was able to get the full effect of just how vibrant the are could be. It was easy to sink into the crowd because of all of the foot traffic, people shopping, and people socializing and simply enjoying themselves. San Sebastian is an amazing, vivid place that is hard to compare to anywhere else. It has all the makings to mark it as a must-visit when in Spain. Not only does it have a beautiful beach, but also offers a plethora of restaurants, markets, bars, clothing stores, local-bakeries, you name it. One of my favorite aspects of San Sebastian is despite being such a popular city, it nonetheless holds appreciation for local producers/businesses; as you walk along the streets you will notice very little chains and more so family-owned establishments, whether big or small. Because of its proximity to France, it isn’t uncommon for you to hear a couple speaking in French while passing, and because it is such the city itself is such an attraction, don’t be surprised if you hear a few other languages as well.

Food of the Week: Grilled steak resting atop a bed of alioli-smothered potatoes and of course, olive oil. On the side lies a bowl of oil-based sauce (parsley, garlic, pepper), a bowl of red pepper, and chips. In Spain, especially in the summer, there are a lot more cold-served dishes as compared to the U.S. Furthermore, in my host family house hold, large portions of meat are rarely the center of a meal. As I responded with this at dinner one night when my host mother asked me how food here compared to back home, as well as admitting that I do miss it a bit, my host prepared this dish for me the next night! It was such a nice gesture and not only that but it tasted amazing! This week I was able to visit one of the top producers of one of Spain’s most prominemt products–wine. Campo Viejo is a popular wine-making company located in Rioja, Spain and is well known for the quality of their wine which they achieve by taking advantage of their unique location. Because of their location (altitude, humidity, climate, etc.) they’re able to make use of a variety of grapes, and hence produce many kinds of wine. Tempranillo Grapes (The King of Grapes) During the tour at Campo Viejo, we were invited into the cellar where they store the wines to allow them to mature for one year minimum (the right) and storage rooms where wine is held before being bottled or barreled (left) where the wine can also be mixed in small amounts. Reflection: By now I am well aware of how integral wine is in the Spanish community which has taken some getting used to. One of the biggest realizations that I have had here, that has allowed me to genuinely experience wine from a Spanish perspective as opposed to an American, is the purpose of wine. In Spain wine is not seen as a sole luxury product or a product used only for celebration but instead is product where its production is just as important as its consumption. Wine in Spain is used as a major contributor to Spain’s economy and also a cooking product, a product made to be understood and a product that you can find anywhere. 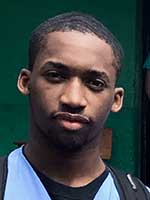 Hello! My name is Bryce Hill and I am a senior studying Biological Sciences. As I near graduation, I look forward to the next step in my academic career--medical school; which I will be beginning this upcoming Fall. This summer, I extremely excited to be traveling to Spain to be a part of the Mediterranean Agribusiness School to study Spanish Diet and Agribusiness, as well as language and culture. I l look forward mostly to being challenged by the unfamiliar and being able to appreciate, experience and learn about life from a fresh lens. As a future health care professional, being able to learn and experience upfront the different customs and languages that Spain has to offer will not only contribute to me socially but also professionally. I am aware that I will be confronted with many different cultures in my future practice so understanding the diet of a certain population or being able to communicate with a patient in his or her native language is something that I know will allow me to be the best provider I can be.