Tomorrow is our last day in Germany together, as our Landscape Architecture in Germany program wraps to a close. This transience feels bittersweet, and I think that I may miss spending time with this group. However, I am certain that I will undoubtedly and indefinitely be nostalgic of Germany once I return to the U.S.. Actually, I already do feel nostalgic of Germany even though I have not physically left yet.

I will return to Berlin to conduct independent research thru the Roy DeBoer Travel Prize after this program, but I think that it is time for me to step out of my comfort of constantly being surrounded by native English speakers.

I have learned to appreciate those whom take the effort to communicate with me in English when it is not their first language, and I have grown more empathetic to those whom have had to navigate the U.S. with limited proficiency to the Enlgish language, especially my mother. I have discovered this morning from social media that my 9th grade Literature and Composition teacher had passed away at 50. I think back to the intentions I have had to reach out to him and update him on how I have been, but now I have lost that chance entirely. Sometimes I think that it is better to visit family and teachers when I have reached a milestone or professional success, but now I question it, especially as I prepare for the eventual end of this wonderful study abroad program.

Mr. Colangelo retained his youth far more than most of us high school freshmen had. He made impressions with a narrated fake worm which sat on his desk and he introduced us to George Orwell’s literature. I also remember him telling us how awkward it would be for him when he looked up from his desk and found one of his students in mid yawn. I hope that I too could still find humor in life when I reach midlife, even if it is mostly cynical.

Nothing lasts forever and everyone eventually leaves; that is the reality of this life, and dwelling in this inevitability is futile.

I think that it is impossible to ever feel truly ready. Perhaps the extent lies at “sufficiently comfortable” or “prepared enough.” The only essence which remains fixed in this universe is the transience of life. I grow melancholy at the realization that everyone eventually leaves and that every experience eventually ends, yet this leads me to appreciate moments and opportunities very much more.

We have left Berlin and are en route to Essen. I still realize that I am in Germany, as it is my first experience flying abroad. To be brief, Berlin is a beautiful, innovative, sophisticated, and introspective city. I look back fondly to the memories I have shared with all the people I have met, from the airport cab driver to practicing Landscape Architect professionals. One of the greatest focal points of the Berlin segment of our “Landscape Architecture in Germany” summer study abroad program was the charrette, or the two-day intensive design collaboration with the Landscape Architecture students at Technische Universität Berlin (AKA TU Berlin). I thoroughly enjoyed collaborating with and learning from the talented students of the class, as their instructor sought for a more creative approach to the class design prompt.

I am very grateful to have worked with Sarah, Jonas, and Arseni. It seemed that everyone was comfortable with sharing ideas and critical yet constructive feedback with one another throughout the charrette. Also, our group was extremely patient yet diligent along with spreading light-hearted humor which I think helped us push through and maintain the morale high throughout pretty much our time together. There was one point during the abstraction portion of our design process that we simply sat and doodled/painted our ideas and visual interpretations of our project site. I remember a TU student telling me, “You can use everything, we are like a family here.” Although I do wish that we had more time with the TU students, I am happy to know that I will return to New Jersey with friends from abroad whom I can stay connected with.

We are en route to Essen and I am looking forward to the latter half of our summer study abroad program.

On our last night in Berlin together, I made a split second, last minute decision to find some late night dinner. Of course, I decided to look for food roughly 10 minutes before 11pm, which was when most restaurants closed business. One nearby Vietnamese restaurant I had visited a week or so earlier was still open, as in they brought all of their outdoor tables and chairs inside but one for customers whom seemed to be chatting.

I walked into the restaurant to confirm and asked, “(in Vietnamese) You’re closed, right?”

“Eh, we have stopped cooking already. We are about to close.”

“Actually… would you like to have dinner with us?” (while pointing to a table next to the counter holding bowls and dishes filled with rice, noodles, herbs, soup, and stir-fry.”

“Sounds great! The only thing is I am vegetarian, but this works.”

“Oh… then it is alright if you would like to sit at another table. We are going to make a veggie stir-fry for you then!”

(I think they thought that I was unwilling to sit at the same table as them because meat was served there, but this actually was not true.)

They brought out a large plate of the rice and veggie stir-fry, and then sat down at their table to eat. I took a deep breath and brought my plate over to them asking, “Can I sit closer to you all?” They quickly responded “Yes!” and promptly made space for me at the end of their table.

My Vietnamese is only proficient, but I would not have been able to communicate hardly or at all with the staff otherwise. They asked me about my major and my study abroad program, and I asked them what they studied/are studying. Unfortunately, none of them attended university in Germany as far as I knew.

I asked them, “…But university in Germany is typically free, no?”

“Yes, but only if you were born in Germany.”

So I rephrased my question to ask, “Which discipline would you study if you were able to attend school here?”

Of Huong, The, Thanh, and Hai, Huan told me that he loved cooking, singing, and liked business.

I also asked them about their experience with the Vietnam War, but they actually had no input to share because the older staff were living in Germany before the Vietnam War had begun. It then made sense to me, as I did not notice as much melancholy in their behaviors and conversing.

Near the end of the meal, Huan tells me, “Remember us. And let us know when you will return to Berlin so that we can eat together again and so we can make more vegetarian food for you!”

And although I was a foreigner to this country, I began to find home in it. The socially constructed territory dictated my feelings of being a foreigner status, but the people I have met have led me to recognize this place as home.

We are beings capable of love, yet also of destruction. We build and optimize entire societies, yet are quick to tear down and end another life without relent in the pursuit of greater wealth, power, and patriotism.

A saying once went, “Construction is an act of destruction.”

I think that construction and destruction cannot ever completely be mutually exclusive. Design was meant to bring order to a world flowing with equilibriums of entropy and chaos. However, to maintain order is to curtail freedom as authority monitors to correct any disorder.

Three years after the Nazis came to power, the Oranienburg Concentration Camp was built within close proximity of Berlin in 1936. This was a strategic move as the camp was isolated from Berlin, yet was close enough that the Gestapo (Germany’s secret police) could use the camp to execute their convicted criminals. Initially, the camp intended to hold males only, but the SS eventually also held female prisoners. This meant that female SS (Schutzstaffel) personnel were then hired to monitor the prisoners. These women were often viewed as progressive individuals, as becoming an SS officer was one of the few opportunities women Socialists had to live an independent life from men and to achieve economic freedom. The average pay per month was 200, yet SS soldiers received 1500 per month.

The goal of the Oranianburg Camp was to exploit prisoners through hard labor while they were isolated from society, though death was not the overall goal despite it having been taken into account. At least 200,000 prisoners went through this camp, and at least 35,000 died (not including the deaths of prisoners whom were transferred to different camps).

Prisoners received badges to signify their hierarchy status. Red signified political opponents. Green signified convicted criminals. Pink signified non-hetersexual citizens. Violet signified jehovah’s witnesses, and women did not exist in this hierarchy. Reports have been made regarding the summer of 1944 about how women were brought to concentration camps for forced prostitution for the privileged prisoners.

Each barrack held between 400 and 600 prisoners, where those higher on the hierarchy scale were housed with less prisoners. It was stated that every prisoner had the right to take two showers and two laundry washes per week, though an anonymous source reported being granted permission to take their first shower after two months since arriving to the concentration camp. Bugs often crawled throughout the barracks and diseases were easily spread.

The materials and manufacturing procedures used today in the shoe industry is largely rooted to the shoe-testing facilities at Oranianburg which prisoners endured through strenuous research experiments. A typical prisoner at these facilities passed away within 6 to 8 weeks at these facilities due to hunger or exhaustion.

The audacity for humans to treat another being with the utter lack of sensitivity and remorse throughout World War II persists the cycles which deteriorate the human society. People rapidly seek to avoid shame, which to psychologists, is the fear of disconnection. However, people become more inclined to exclude others when they feel that they already belong to a specific group, as if inclusion is a detriment to their validation of group membership.

The human condition can be both astounding yet devastating. To seek order is to seek an extent of control, and to seek control is to command authority to monitor for and maintain order.

But you must first be willing to see the disorder. 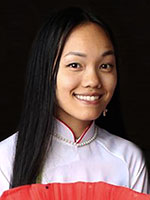 Born in Los Angeles, Dianne studies Landscape Architecture with a background in Mechanical Engineering at Rutgers University, where she serves as the returning Co-President of the Rutgers Asian Student Council. She has worked with VietLead as a Program Assistant in Camden, NJ and has interned at OCA National in Washington, DC. Dianne’s interests include: creating art, reading, learning tech, and studying war history.