Today is the first day after arriving back in the States. Already, I miss the clean subways and multiple transportation services that we experienced everyday. Maybe it’s because it’s the weekend, but one thing I definitely don’t miss, is the traffic that can be found when traveling on the George Washington Bridge. It’s also a little weird that I’m actually missing the bread from Germany, especially in the mornings when I have nothing to eat at home.

Overall, the study abroad trip in Germany is something I’m glad I went on. I experienced and learned so many new things, and it made me go out more in the summer. The parks and places we visited in Germany can probably be found in different styles all over the world, but a lot of the ones we went to made sense for the area as a whole. It was also amazing to learn about techniques that they used over there that we are only implementing in recent years. The designs of a lot of the parks were what we learned about in classes, and seeing them in real life was a great experience for me. I would definitely recommend people to go to Germany, whether it is on a study abroad trip or not, and experience the things from a different country. A lot of the architecture and designs found there, can be found in the United States because we are a young country that has history from the rest of the world. So much has happened in Germany itself, that would probably not occur in any other country, but some of those events have shaped how the country is today, and the same can be said for the United States.

We have finally hit the last day of Germany. All I can really say is that I want to go home so bad, but at the same time, I wish we had more time to have fun. I will save my remarks on the overall trip for the next blog, but I’ll first touch up on what we did yesterday as the last official day of class.

Yesterday we made our way back to Landschaftspark, but this time to a more underdeveloped area of the park. There we helped Frank note down the circumference, height, and DBH (diameter breast height) of 50 birch trees within the area. With this data, he would be able to see how the trees are functioning while growing in a site that was contaminated. We also got to see Frank take core samples from a few trees, and it was amazing to see where the center of the tree is and how the rings formed over time. While it was a new and fun experience, walking through a bunch of meadows and tree branches hurt a lot. I believe I also got stabbed by some of the meadow plantings, and had to take small thorns out from by shoes and pants. After taking the core samples and collecting data, we then headed to Tiger & Turtle, which is an architectural piece that sits on top of a mountain. The structure looks like a roller coaster from afar, but it is actually something that has stairs to walk on top of it. From there we headed back to the apartment where we ended the trip with a lovely evening on the roof garden with the teachers. We drank some wine as we talked about everything that we have been through in Germany, be it good or bad. To those interested in food found in Germany, hopefully this blog will provide some answers. First things first is the döner. This is a dish that originated in Turkey, but someone found it’s place of being one of the most popular dishes in Germany. The döner consists of kebab meat in a flatbread with salad and sauce. Some places also allow for fries to be included with the döner, either in the sandwich, or on the side. I had a döner the first day I arrived in Berlin because it was the dish recommended by both Geza and Poldi. I had actually that it would be skewers because that’s what comes to mind when I think of a kebab, but I was so wrong. I didn’t go with the döner sandwich, but opted for a box instead. Since the first day, I’ve had döners more than once, and with different combinations. Not only is the price cheap, but it’s also delicious. Next up are these hot dogs that we only found in Berlin. The hot dog place is called OiShii Hot Dog, and it combines hot dogs with Japanese food, such as tempura and fish roe. This place was cheap and delicious, and right next door to our apartment in Berlin. I honestly wish they would expand to the United States, because it’s just so good. This was also a place where I had a lot of Radlers, which is a German beer that has a lemon flavor to it. These are definitely the two that I would recommend the most for people traveling to Germany. For those who have dietary restrictions, some restaurants and grocery stores sell vegan food. Bread is also a big part of life in Germany, and bakeries and small stores have bread that fit the restrictions of every person. I honestly thought I would get tired of bread because I’m someone who doesn’t eat a lot of bread to begin with, but it was not that bad. For those who want to eat fast food from America for whatever reason, I have come across several McDonald’s, KFCs, Pizza Huts, Burger Kings, and so on. I would still recommend to try the food of the country you are in, but there’s always times where you feel like eating fast food.

There’s only two days left until we leave Germany. Yesterday, we went to Margarethenhöhe, which is a village that was originally created for workers to live in, that was within close proximity to their workplace. The houses within the village evolved over time, as the architects learned from their own mistakes. A lot of the revisions were also due to the fact that times were changing and different requirements needed to be met. While this village consisted of free social housing for workers, these workers were not meant to get too comfortable with them, as they would get hired and fired quickly. After the village, we made our way to Grugapark, which is a botanical garden in Essen. Unlike the botanical parks in the United States and Berlin, Grugapark consisted of areas that people can relax and have fun in. There also weren’t a lot of signs that explained what each type of plant was, and there was a small railroad that went around the park. Today we headed to Landschaftspark in Duisburg Nord. I was looking forward to coming here the entire time in Germany because this park is constantly brought up in case studies in class. I’ve also seen pictures from last year of the students who came and had a lot of fun in this park. Landschaftspark is a park that was created around an old industrial facility in a contaminated area. Normally, we would demolish buildings that are no longer in use, especially if the site is contaminated, and prevent people from going into the area until all contaminants have been remediated. However, they had a different approach to dealing with the site. They used plants to remediate the soil through phytoremediation, while the hotspots of heavy contamination were treated through other means. The park now includes touching the buildings as part of the experience of the site, because the workers back in the day went through the same thing. They also integrated some structures into play areas, one of which has rock climbing areas, while another has a slide. Another thing about the park is that the they are protecting the infrastructure that still exists. They want the park to slowly degrade as time goes on, so parts that fall off will not be replaced. This is an interesting way of memorializing a place that has historical significance, as we usually try to protect it from destruction and make repairs that mimic the original design. Today officially marks the beginning of the last week in Essen, and in Germany overall. We finished our studio presentations last Friday, coming up with concept designs for Westpark, Bochum. Some people celebrated by going out and drinking, but I was so tired, all I could think about was sleeping, especially when we still had class the next day.

Even though it is the last week in Germany, we still have classes to attend/places to go. We headed to the European Museum of Garden Art and Benrath Castle, as well as the TV Tower on Saturday. We then proceeded to our one-day weekend on Sunday, where I simply slept in and only went out to eat dinner. Today we headed to Nordpark in Dusseldorf, where we got to see different types of landscape architecture used in different areas of the park. Certain areas contrasted with one another, while others were either in process of being restored, or were changed to cut back on costs. After that, we headed to two castles, one which was a smaller castle that was going under renovation, and the other, which was in ruins by the Rhine. 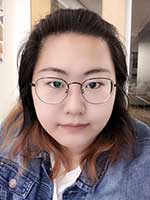 Hi, my name is Grace Li and I am a Landscape Architecture senior graduating in August 2019. I love traveling, but have not been to Europe yet. I have mostly traveled around the United States and in China, which gave me different interpretations of the same planet. I am looking forward to Germany, not only as a start into my adventures in Europe, but also for the amount of knowledge that I can gain as a designer.