On the last few days of the trip, I had many early mornings and lots of interesting experiences. We visited a Mennonite dairy farm, palpated cows to determine whether or not they were pregnant, worked on a pig farm (giving injections and castrating) and created a presentation for the class on a topic of our choice. The pig farm stood out the most to me. The animals were kept in conditions that would have a farm shut down immediately in the states. The pens (if that’s what you’d like to call them) were caked with feces, seeming as if they hadn’t been cleaned properly in months. The pigs had hot drinking water, which is far from optimal. Each pig was caked with feces and far too many were packed into a pen. We learned that this is common practice within most developing countries, including Belize. It was definitely shocking.

Palpating the cows was also an extremely interesting experience. I’d learned a lot about the process in my practicum and reproduction classes, but I was never given the opportunity to try it for myself. Although it was admittedly pretty gross, it was amazing feeling the cervix of the animal and physically being able to “feel” their pregnancy.

Visiting the Mennonite farm was a breath of fresh air. The animals were well cared for and genuinely seemed to be very happy. There were some eye lesions and infections, but they were likely due to the vast space of land the cows were given to graze on. The man who owned the farm was absolutely adorable and so eager to talk to us. It was obvious that animal welfare was extremely important to him.

Some of the greatest memories created in Belize took place in Placencia, an area on the coast filled with ex-pats (individuals who used to reside in the US), tourists, and small communities of Belizean natives. The area was filled with beauty: sandy shores with gorgeous oceans, islands with natural wonders such as the world’s second largest barrier reef and grandiose resorts. We spent the majority of our time at the Placencia Humane Society, where we assisted in the running of a free clinic on the first day and a low cost clinic the second day. On the first day, we rode in the back of a pick up truck around the Seine Bright village, looking for animals (both strays and “owned”) in need of veterinary care and potential spay/neuter procedures. We brought in various dogs and cats and treated them lovingly: performing the spay and neuter procedures to decrease the chances of contracting TVT (a sexually transmitted tumor that proves deadly or extremely costly in most situations), as well as deworming and bathing them as to remove fleas and ticks that had embedded themselves in the fur/skin. It was amazing seeing how happy the people were to see us: they knew that we were there to help. Our second day (the low-cost clinic) was significantly slower, but was still an amazing educational experience. Being in the operating room truly gave me a taste of what it would be like to be a small animal veterinarian: an experience I never had before traveling to Belize.

The trip was not devoid of fun and games. We swam in beautiful bodies of water, stayed in a Hostel (which proved to be an….ummm….interesting experience to say the least) and snorkeled along the reef. The water near the reef was absolutely mesmerizing : crystal clear and turquoise. Although the reef was cool, it was somewhat depressing to visit because the majority of it appeared to be dead. There was hardly any marine life and what was there was far from interesting : a fish or two, some sea cucumbers and grayish looking coral. Although the area was somewhat drab, it’s  pretty cool to be able to say that I’ve had the experience of snorkeling in such an amazing place.

This week was full of new experiences and amazing memories. We began the week suturing, as previously described in my blog. We then were given the opportunity to gain hands on experience on local farms. We visited several farms: including horse, sheep and beef cattle farms. We learned to inject both subcutaneously and intramuscularly.  We castrated several lambs and calves and even got to practice herding/catching animals. The fun didn’t end on the farms, though. We explored Belize on our down time: canoeing through caves with Mayan history, eating at several authentic Belizean restaurants and swimming in various rivers throughout the countryside. I learned not only the veterinary practice, but immersed myself in Belizean culture, and it couldn’t have been more rewarding.

Yesterday we woke up bright and early and headed to the Paws Vet Clinic to get started on our educational experience. We spent the first few hours listening to an introduction to the species, breeds and customs we will encounter during this trip. We then moved on to a first time topic for the majority of us: sutures! We learned about all kinds of sutures, from the simple interrupted, to the continuous, to the hidden knot. It was all a bit mind boggling at first. Nothing seemed to make sense and it was extremely difficult to visualize each suture and method.

After our brief introduction, we were each handed a chicken leg that was sliced in two areas and a suture kit. We were given a brief tutorial and began working on our first suture: the simple interrupted suture. It was really hard for me to figure out how to get it started, but it quickly became easier and easier. Unfortunately, this was the only suture I can confidently say I would be able to do again. We moved onto hidden and continuous sutures, which proved to be extremely difficult to me. Needless to say, I will be purchasing a kit and a banana/ chicken piece to practice my skills.

After we finished suturing our poor chicken legs, Dr. T (the veterinarian who is working with us here in Belize) announced that we would be practicing our sutures on live flesh. He had four spays/neuters scheduled for the day in both dogs and cats. We were split into groups and each group was assigned an animal. I was assigned a female German Shepherd mix that was being spayed. We watched as Dr. T removed her reproductive system and assisted in cutting and holding the appropriate locations. After the procedure was completed, he sutured together the muscle of the incision and instructed us to suture up the skin. We each took turns placing a simple interrupted suture into the skin. I can honestly say it was the best experience I’ve ever had: there’s no chance I would have had such an experience as an undergraduate in the states! Studying abroad has been a big goal of mine for years. I’ve thought about studying in the rainforests of South America, in the savannahs of Africa or in the bustling cities of Europe, but Belize never crossed my mind. I always imagined saving wild animals or working with conservationists, but after previous experience within the Rutgers farm, I’ve decided that working with large animals is my calling. I can’t wait to gain hands-on experience and an understanding of veterinary practices, not only within the United States, but internationally as well.

I’m petrified to be going on a plane by myself, but I know this is all part of the experience. I can’t wait to meet all of the other students and instructors, as well as the animals we’ll be caring for! Hopefully this trip brings me not only a better understanding of my field, but great times with great people as well! 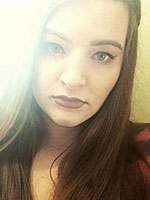 Rutgers Honors College Pre-Vet Student exploring Belize and all of the adorable creatures that reside there.